Get CutCardStock posts delivered to your inbox:

Over the years, crafting has become a way for me to express my appreciation for others or to bring joy to family and friends. Like a love language. So when a good gal pal of mine asked me to help with her school’s upcoming gala, I was all in! Sign me up! 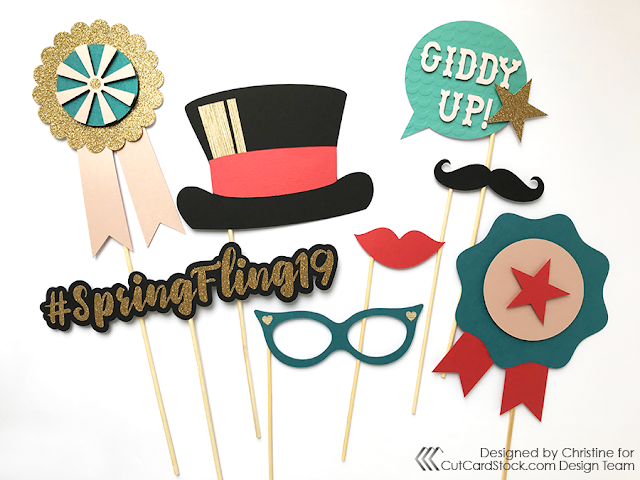 At her event, there will be a photo booth, and while it’s easy to go to a party store and pick up a premade set of photo booth props, it’s just as easy to make your own. The best part is that I created a set that matched their event color palette and theme! You can’t put a price on custom, one-of-a-kind creations!

The Curious Metallic cardstock has a beautiful shimmery surface that really elevated the appearance of the props, which was perfect for the sophisticated evening event.

I cut out a variety of shapes using my Silhouette CAMEO die-cutting machine as well as creating my own designs that were specific to the school’s mascot (trailblazers) and gala theme (spring fling with an equestrian flair).

Once all the pieces were cut, I used foam adhesive and my favorite crafting glue to assemble each design. I love using foam adhesive because it’s a great way to add dimension to any project. On a few props, I added rhinestones for a little sparkle and visual interest. It’s a gala after all!

The last step is taking these diecuts and making them into handheld props. On top of a thin line of glue, I placed a bamboo skewer and held it for 10 seconds to secure it.

And it’s as simple and quick as that! The hardest part might be choosing the diecut designs, but that’s also a fun process because there are a lot of great cut files out there.

If you have a party coming up, do yourself a favor and save this post to your Pinterest board (I know you already have one started!) so that you can whip up some unique photo booth props!

This site uses Akismet to reduce spam. Learn how your comment data is processed.

Isn't this the cutest coffee cup card?! We love th

There's still time to apply! New this year, we are

How about a little bit of rainbow to brighten up y

Amber Rain is on the blog today to share this love

Annie's beautiful floral card is sure to brighten

Take a look at this stunning card by Crystal! She